When it comes to disposing of food waste, which works best for commercial kitchens and our waterways – garbage disposals or strainers?

At first glance, a garbage disposal might seem like the easiest choice – just flip a switch and the food is gone. No scraps to throw away. What could be simpler?

Instead of food scraps slowly decomposing in municipal landfills, they’re flushed down the pipes to wastewater treatment plants to be turned into “sludge” and used for fertilizer. According to the Environmental Protection Agency (EPA), in the United States food waste takes up nearly 20 percent of landfill space, making it the second largest category of municipal solid waste. 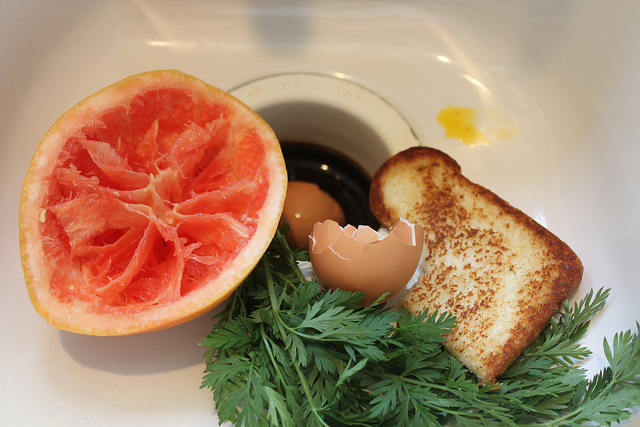 Perhaps more troubling is the fact that when bacteria in the landfill break down food scraps, methane is produced. And methane from landfills is a major source of greenhouse gas, according to the EPA, unless the landfill has a system of capturing methane to generate energy.

By keeping food waste out of our landfills, garbage disposals help protect the air we breath. But it's not that simple. Sending food waste into the sewers comes with its own set of problems.

Garbage disposals are a costly choice for our waterways and wastewater treatment plants. Food particles washed down the drain from garbage disposals don’t just disappear; they end up at treatment plants, where they are filtered out and chemically treated at great expense to municipalities and rate payers. Fatty food particles also contain grease, which can build up and lead to clogs in pipes and drains.

When waste water first enters a treatment plant, it passes through a series of screens to remove debris and solids. Heavier particles sink, while particles with entrapped air float to the top and can then be removed.

The next stage is to remove organic matter, including nutrients like nitrogen and phosphorous from food waste. A range of techniques, such as “trickling filters” and aeration, can be used to remove biodegradable organic material from the wastewater.

It’s especially important to remove the nutrients from food waste, as too much flowing into our waterways can lead to uncontrolled algae growth in freshwater and marine environments. As more and more algae and green plants grow, others die and become food for the bacteria that decompose them. The exploding bacteria population uses up dissolved oxygen in the water, leaving none for other life. The result? Fish kills and dead zones.

Strainers are an easy and cost-effective way to bypass the problems caused by disposals. High-quality strainers can be attached under a three-compartment sink or a pot-washing sink in a commercial kitchen. Strainers capture food scraps, which can then be thrown away in the garbage, recycled as compost, or donated as food scraps for animal feed. (Contact your local solid waste, county agricultural extension office or public health agency to find out what types of food scraps you can donate.)

Thermaco’s Big Dipper Internal Strainer (IS) models attach to sink inlets and catch particles like rice and cole slaw in a basket. A skimming wheel removes oil and grease, which is captured in a grease collection container.

For large institutions like hospitals and correctional facilities, strainers can be modified and installed in basement locations or mechanical rooms.

Another bonus is that strainers use less water than garbage disposals, since you must run water while scraps are being ground up in order to keep the drain line from becoming clogged. And garbage disposals are not intended for extremely fibrous waste, like artichokes and potato peels, or bones. These items clog the drain line, causing it to back up. Worse still, bone fragments often lodge between the blades, causing the disposal to stop working altogether.

Food waste from industrial kitchens doesn’t have to be a burden on the environment or municipal sewage systems. Using the proper strainers improves the quality of discharged water from our businesses and institutions.