Held on May 20-22 in Myrtle Beach, South Carolina, the 2012 SEUS-CP Alliance Conference brought together 300 high-level governmental and business leaders  -- all sharing the common goal of enhancing strategic trade and investment between the United States and Canada. 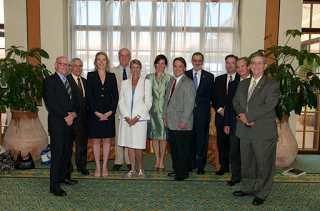 NC Delegation to SEUS-CP Alliance
“Across Canada there is a growing awareness of the importance of taking care of the environment, and both citizens and government officials are taking steps to protect the environment from the hazards of FOG,” said Owen George, who attended the 2012 SEUS-CP conference.

A case in point is the city of Halifax, in Nova Scotia. Halifax has a long and proud maritime history – and an aging wastewater infrastructure.  The city’s municipal government is waking up to the urgent need to protect their infrastructure and the region’s natural environment from FOG.

“Before, there was only the provincial government’s Pollution Control Authority to oversee FOG,” said Dave Rockwell, who distributes Thermaco equipment in the Halifax area. “With thousands of grease traps in Halifax alone – and only two inspectors – it was impossible to enforce even minimal standards. Nowadays, Halifax Regional Municipality’s (HRM) Wastewater Management Department is involved.”

The HRM’s 2010 By-law W101 requires that a restaurant’s effluent must remain below 150 ppm – or face a fine of $500 that can be applied multiple times until the grease problem is resolved.

HRM By-law W101 also bans the use of enzymes, bacteria, or solvents to facilitate the passage of oil and grease through a grease interceptor.

“There is a slow but sure trend of people becoming more environmentally aware – and more aware of the importance of healthy foods,” said Rockwell. “Likewise, restaurant owners are becoming more aware of the importance of refraining from the use of enzymes in grease traps – which just passes the problem to the municipal water treatment plant. Instead, restaurants must clean or pump their grease traps on a regular basis.  The next step is to use a self-cleaning grease trap such as Thermaco’s Big Dipper, or a high efficiency interceptor such as Trapzilla.”

The story is the same for municipalities across Canada and the U.S.  Increased municipal FOG regulation and local enforcement are helping to protect wastewater infrastructure, as well as the environment.

The SEUS-CP 2012 conference provided a great opportunity for raising awareness of this crucial issue.