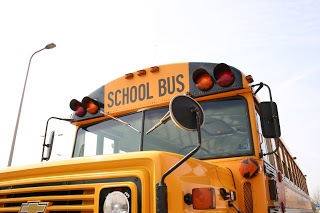 Greensboro – Guilford County school buses are running on fuel that includes used cooking oil -- as the district tests the effects of using biofuel.

Jeff Harris, the district’s director of transportation, recommended in March that the district test the use of biodiesel in 50 buses of the 600-bus fleet – to research how using alternative fuel could reduce costs in the future.

The Board of Education voted unanimously, 10-0, in favor of the trial.
Harris reported to the board that biodiesel made from used cooking oil waste could lower fuel costs, boost the local economy and reduce the number of pollutants in the environment, according to News & Record writer Dioni Wise.

“For the last month, we’ve been mixing our own blend of B-10 (10% biofuel) and running it in 50 to 60 buses - the results have been excellent - no noticeable difference from regular fuel” said Harris.

Recent spikes in gasoline and diesel prices have motivated school districts to seek alternatives to the use of traditional diesel fuel to meet their transportation needs.  With the board’s decision, Guilford County joins a growing number of school districts across the country experimenting with biofuel.

Although biodiesel can be manufactured from a variety of vegetable oils, used cooking oil from restaurants and food service facilities is currently the most cost efficient feedstock for production.

Companies that manufacture biofuel often struggle to acquire enough used cooking oil to meet demand.  Due to this situation, there is a growing interest in the use of oil and grease captured by grease traps.   However, grease collected from grease traps can offer challenges for conversion to biofuel, as it is usually degraded and mixed with water.

“We worked with Piedmont Biofuels to test the samples,” said David Lillard, the Marketing Manager at Thermaco.  “The results indicate that FOG collected from Trapzilla can easily be converted to biofuel.”

Guilford County’s plan is to purchase biofuel from certified venders and mix the product with fuel in various concentrations.

Researchers at RTI International, a nonprofit institute that provides research and technical services to government and commercial clients around the world, envision a future in which grease collected from grease traps will play an important role in the establishment of municipal FOG to biofuel programs.

“After quite a bit of research, as well as the waste characterization recently completed by Piedmont Biofuels on Trapzilla grease, Thermaco’s product seems to fit the bill - better than any other products we have found,” said David Robbins, Sr. Water and Sanitation Advisor for RTI’s International Development Group.

Guilford County’s biofuel test for its bus fleet is scheduled to continue into the fall of 2012.