In the last decade, used cooking oil, or yellow grease, has gone from something that restaurants paid to dispose of to something that could earn them extra revenue.

Despite the news coverage, though, successful prosecutions of grease theft are still relatively rare. 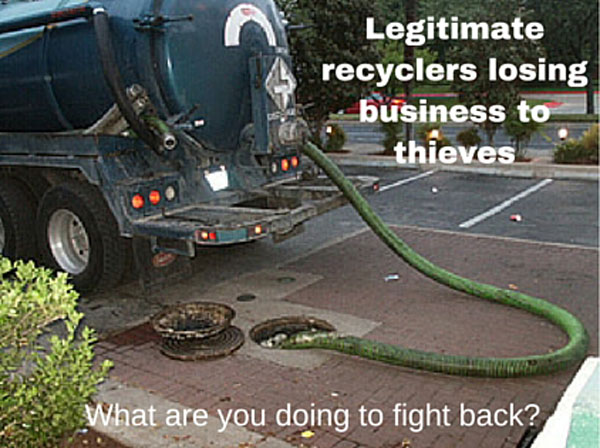 The National Renderers Association says that although reported grease thefts more than doubled between 2005 and 2012, from 2,362 to 5,943, the number of charges filed was still small – just 188 in 2012. Only 97 successful prosecutions resulted.

Biodiesel manufacturers can take the cooking oil and process it into biodiesel fuel, which is used to run a growing number of trucks, buses and other vehicles. And as demand for biodiesel has grown, so has demand for its raw ingredient: used cooking oil.

When thieves steal used cooking oil, they usually either sell it to biodiesel facilities themselves, or, in some cases, may actually turn it into biodiesel. That costs restaurants and other businesses that lose out on some extra revenue. In some places, it also costs taxpayers because no taxes are collected on black market biodiesel.

But restaurants, law enforcement and grease processors are fighting back.

Restaurants used to dump their used cooking oil in barrels they kept out back. To get at the barrel, someone with a pump truck could come along and stick a hose into it and suck out all the grease. Increasingly, though, grease storage containers are kept locked.

Technology is also coming into play. Some restaurants — sometimes with help from grease haulers they’ve agreed to sell their used cooking oil to — have added alarms to their grease storage containers or even installed cameras.

Some rendering companies, which process used grease into biodiesel and other products, have even hired private security firms to protect their raw materials at the source.

In California in 2014, state agricultural officials offered $500 rewards for information leading to the conviction of grease thieves. State legislators there, also in 2014, approved tougher penalties for grease theft, raising the fine for first-time offenders from $500 to $1,000.

The California legislation also makes it easier for the state to suspend or revoke licenses of certified haulers or renderers caught stealing grease.

California isn’t the only state that licenses grease haulers and renderers. Other states, too, have introduced licensing requirements intended in part to give authorities another tool to use in battling grease theft.

In many places, though, according to news reports, grease thefts are a low priority for police more concerned about drugs and violence. So preventing theft with security measures such as locks, alarms and camera systems, will likely remain the top approach for restaurants.