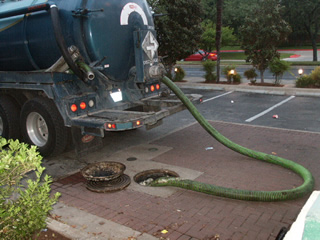 The strange odor, which emanated from somewhere on the college campus, stung the nostrils of the untrained and the unsuspecting.
But mostly the smell, characteristic of rotten eggs, was making people afraid.
What is it? What can it be?
The students wrongly assumed the awful smells were from hazardous chemicals. Someone called in a Hazmat team, and buildings were evacuated.
Such circumstances can cause people to panic, and promote hysteria, even.  It’s a troubling scenario, particularly in this case, because there was little to worry about. The smell, though odd and malodorous, was a relatively normal one, emitted with the pumping of a large grease interceptor.
It’s also a smell that is mostly preventable.
Of the calls we receive, some of the most urgent refer to the servicing of large, conventional 1,000- to 5000-gallon grease traps on college campuses or in crowded downtowns.
But new technologies, such as Trapzilla, help schools, businesses and other entities meet community standards and keep odors to an acceptable minimum.
Grease separators are pumped every few months, meaning food scraps and grease products have considerable time to degrade.
Many factors, including the size and design of the separator, influence the degradation process. The inherent odors stay confined to the separator until its contents are disturbed.  At this point, the entrained gases, such as hydrogen sulfide — the rotten eggs smell — transition from a solution state to a gaseous state.
That’s bad news for our nostrils, but the force multiplier is found in the pump truck’s vacuum system.  The person pumping the grease trap “slurps” the trap much like your home wet-vac slurps a spill.  The velocity of the air suction brings the slurped liquid to the vacuum truck’s tank. The liquid falls into the tank, and the air is expelled from the top of the tank.
Can you smell that?
It was that expelled air, coming from a grease receptor being serviced in the dining hall, that had students scurrying from campus.
The ratio of air to liquid in the slurping process can vary widely, but, for our calculations, let’s use a 15 gallons of air for every gallon of liquid slurped out of the grease separator. Most stand-alone fast-food restaurants built in the past 10 years use a 1,500-gallon grease separator, which is usually placed underneath the manholes in the drive-through lane.  When the 1,500 gallon-separator is pumped, about 22,500 gallons of stinky air is expelled in the process, which lasts more than 15 minutes, amounting to a long, smelly “poot.”
How About a Short Toot Instead of a Long Lasting Poot? 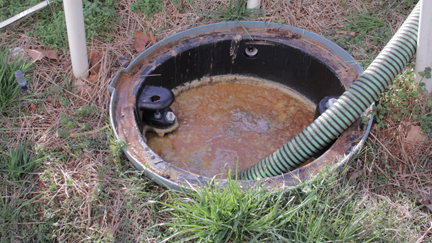 But in the past 20 years, the 1,500-gallon grease separator has became an informal-consensus standard across the nation, as sewer districts became deeply concerned about meeting the ever-tightening federal and state regulations relating to Sanitary Sewer Overflows, or SSOs.
Added retention time, it was believed, was more efficient in allowing the grease and oils to separate.  There also was widespread concern that restaurants, especially high-volume fast-food sites, were discharging copious amounts of grease and oils.
In that time, much has been learned about restaurant grease, fat and oil discharges, and more compact grease separators with new separation technology are becoming the trend.
For example, a busy Burger King in San Diego has its Trapzilla® TZ-600 separator pumped every three months, and the restaurant is safely meeting the sewer district’s compliance requirements.
The Trapzilla separator has a 95-gallon internal liquid volume and a novel design, allowing it to hold more than 85 percent of its liquid volume in separated grease in a safe, trapped state.
But, let’s not forget: That it’s a grease trap and, like all grease traps, it stinks when pumped.
But also remember this: The pumping process is a short toot — 95 liquid gallons —resulting in just 1,425 gallons of expelled air during the pumping process.  In other words, just 6 percent of the air is expelled, compared to the pumping of 1,500-gallon grease separator
The result is a short flatulence toot.
Smell that? We smelled a little something, but it’s gone now.
Exactly.
Bill Batten
grease_interceptor grease_removal grease_trap grease trapzilla grease_retention_time pumping_out_grease_trap