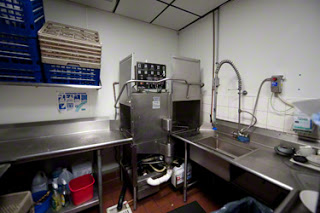 A commercial dishwasher’s output is hot, soapy water and is ALWAYS running richer than needed in terms of detergent chemicals. Why?  Because it is a far lesser evil to send unused detergent (high in BOD) with sanitizers (chlorides) and water softening agents (a variety of mineral grabbing stuff so as to leave no spots on the washed ware) THAN to have a potential sanitary hazard imposed on the community’s dining customers, i.e. dirty dishes.  Sending a commercial dishwasher’s output through the kitchen’s drainage plumbing emulsifies any and all fats or oils in its route, including the retained grease and oils in a conventional downstream grease separator.  Notice the wording “conventional”.  Anytime a warm (usually no longer hot by that time) soapy flow enters a conventional (think traditional inlet and outlet configuration), it rises “lava lamp” style and displaces the cold water already in the separator.  As the cold water layer falls, it tugs on the underside of the trapped grease mat, adding some gentle mixing action.  Gentle mixing action is not normally a problem with just warm water alone, but as described above, it is the un-utilized detergent that craves to be with the lipids and just like when they play a slow number at a wedding party, the gentle mixing makes it easy for the bachelor detergent molecules to get dance partners with those wallflower lipid molecules.  Once they have that first dance, they are inseparable.  They are also soluble, too, and after that first dance, they not only leave the dance floor, they also leave the entire party out through the grease separator’s outlet exit (pipe).

Opt for a Separator that Minimizes Emulsification Losses from Soapy Flows

This is the concept of designing to eliminate lava lamping or more correctly, thermal inversion.  Thermaco’s Trapzilla is quite small compared to a traditional concrete grease interceptor so how does it separate, retain what it has separated and somehow meet local sewer district discharge criteria? Two points:  First, It has a unique horizontal baffle that precludes thermal inversion. The warm water is not allowed to get up into the already trapped grease area, thus no detergents are getting up there either.  Second, the flows coming out of food service establishments are already stratified in the case of high flow discharges (pot sinks) or are readily separable low flow events where the separator easily separates the free-floating fats/oils.  In other words, the last thing out of a pot sink is what was floating on its surface.  As the floatables ride down to the sink drain, because they are the last to leave, they effectively just saunter slowly down the pipes because there is no longer head pressure prompting them to move briskly.  Sink spray down at the pre-rinse sink is a low flow event and begins to separate into stratified layers as it moves through the piping.  Thus, it is not hard to separate those free-floating fat/oil globules from slow moving flows like the end of a sink run or a spray down activity.
Do we recommend Trapzilla units for food processing plants where the third shift walks around with high-pressure spray hoses?  NO!  That type of 100% physical (sheared) fat/water emulsion is very difficult to separate by any kind of separator short of storing over time in large vertical tanks or slowing running through a centrifugal separator.
Does the Trapzilla separate as well as a 1000 gallon separator? Not quite, but almost. We recently conducted a study at a doughnut operation of a Trapzilla versus the site’s prior 1000 gallon separator (see study report link at end of post).  The 1000 gallon was 9.7 mg/l FOG average over two months and the 95 gallon TZ-600 was 23.2 mg/l averaged over the next four months.  It is a pick your poison kind of decision and this is why pretreatment coordinators are increasingly having to walk away from a comfortable one size fits all approach as they balance community needs, collection system needs, WWTP treatment and other parameters going forward.
Pumping contractors tell us the grease pumped out of Trapzilla® units at sites with commercial dishwashers is brown and they are initially surprised as they are not accustomed to seeing brown grease at those sites.  Obviously, the unspent detergents are not getting to the already trapped grease, a testament to no thermal inversion occurring.
Bill Batten
Doughnut/bakery third party evaluation report
Please note this is a large report pdf and will likely take a brief while to download.
grease_interceptor grease_removal trapzilla thermal_inversion commercial_dishwasher commercial_dishwasher_attached_to_grease_trap detergents reducing_emulsions