The Asheboro Wastewater Treatment Plant was built in 1962, during a different era. The Cuban Missile Crisis was right around the corner and America had just launched a space race to put the first man on the moon.

At the time, if you had mentioned “Class A biosolids” or “thermophilic bacteria” to a manager or operator at the plant, chances are they would have looked at you as though you had just come from the moon.

But the Asheboro, N.C. plant — even with some infrastructure that dates back more than 50 years — is on the leading edge of wastewater treatment. And it is the plant’s operators and staff that now talk about biosolids, bacteria and other cutting edge practices.

The plant treats about 3.5 million gallons per day of wastewater generated by this North Carolina town of about 26,000. But changes in the economy in Asheboro — which mirror shifts many small towns have experienced — put pressures on the plant.

Built to handle up to 9 million gallons per day, the plant has seen its wastewater volumes decline in the last couple of years as manufacturing plants in town reduced their operations or closed entirely. That means the plant had to find ways to be more efficient and operate on a smaller base of ratepayers.

Grade 4 is the highest level available under North Carolina regulations. Of 10 plant operators who work at the Asheboro facility, nine are certified at Grade 4. That means they’re capable of running any wastewater treatment plant in the state. (The 10th is a veteran employee with 30 years of experience under his belt.)

Each operator is assigned a building at the plant and is responsible for preventive maintenance in that structure — keeping pumps running, changing the oil on machinery and the like.

The steady staffing, and the operators’ high level of training, means that plant equipment is well maintained and breakdowns more infrequent. That in turn means that money that might have been spent on repairs instead can be invested in plant upgrades, further driving efficiency.

The operators could work anywhere in the state, but they don’t leave.

“Theoretically any one of them could go operate a plant elsewhere,” says Michael R. Wiseman, the plant manager. But, he added, “Everybody seems very content.”

Two of the plant’s operators were named N.C. Operator of the year in 2010 and 2013, in part due to experiments they ran and the innovation in plant operations that resulted due to those experiments.

The Asheboro Wastewater Treatment Plant encourages its operators to come up with ways to operate the plant more efficiently and effectively. And it gives them the freedom to run small experiments at the plant to prove out those ideas before they are implemented.

“They both won because of trials they ran here,” Wiseman says. Those trials also helped the plant be honored with the Wastewater Treatment Plant Operation & Maintenance Excellence Award in 2010.

One such innovation was to change the way the plant handles removing nitrogen and phosphorous from wastewater.

In the last few years, N.C. regulators have gotten much stricter about the amount of nitrogen and phosphorous they allow in treated wastewater that’s discharged back into streams and rivers.

Left unchecked, nitrogen and phosphorous can lead to rapid growth in algae. As algae pull oxygen out of the water, fish and other animals that depend on oxygen die.

The Asheboro plant has reduced its nitrogen levels from 20 parts per million (PPM) to 3.5 to 4 PPM, and its phosphorous from 1 to 0.1 PPM. The plant now exceeds its requirements for those two nutrients, and Wiseman and his boss, Water Resources Director Michael D. Rhoney, P.E., expect that it will meet tougher requirements that will almost certainly be coming in 2016.

But along the way to reducing its nitrogen and phosphorous levels, the plant also figured out a way to dramatically cut its energy cost and help a local manufacturing company save on waste disposal costs.

The plant operates two 2 million gallon aeration tanks. Each of the tanks are 18 feet deep, and what happens in those tanks is key to how the facility was able to dramatically reduce its output of nitrogen and phosphorous, cut its energy costs and help a local manufacturer run more efficiently. 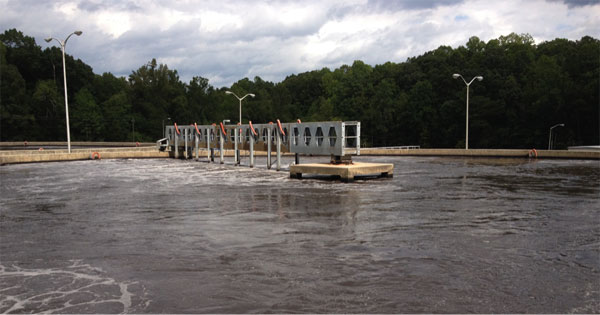 Prior to the new treatment process, the blowers in each tank ran 24 hours a days. But operators soon figured out a better way. By running the blowers for two hours, and then turning them off for two hours, plant operators force bacteria to go from operating aerobically to anaerobically. The bacteria go after oxygen tied up in nitrates in the water, releasing nitrogen out of the water and into the air.

To force the microorganisms to switch quickly to anaerobic mode, operators feed sugar water into the tanks. The bacteria consume that, increasing the amount of oxygen they are consuming, and quickly turn the tank to an anaerobic state.

The sugar water is a waste product of a cereal manufacturing company in the town. Before the new treatment process was put in place, the company had to pay for its waste sugar water to be disposed of. Now the Asheboro plant comes and carries it away.

The plant not only gets the sugar water to power its denitrification, it also saves an estimated $40,000 per month it would have otherwise spent on an artificial source of carbon to drive the denitrification process. And because the blowers are now on for half as much time — 12 hours a day vs. 24 — the plant’s energy costs are lower, too.

The primary investment for all this — besides the ideas and innovation of the plant operators — is $80,000 to $90,000 in tanker trucks and storage containers for the sugar water. With the plant saving $40,000 per month (on an operating budget of $2-3 million per year), it didn’t take long for the city to get its return on that investment in trucks and tanks.

“I enjoy my job because of the challenge of solving problems,” Wiseman says. “I encourage my operators to participate in that. Then the job has more meaning to them.”

Operators continue to attend seminars, conferences and other training events, and then return to share their knowledge with their teammates.

“Wastewater is a massive field,” Wiseman says. “It helps to have the operators well educated and trained so that we can bounce ideas off each other.”

Among those ideas is an effort to change the kind of biosolids — sludge — the plant produces.

Now, the plant pays over $100,000 per year to dispose of sludge that’s classified as a Class B biosolid. But they hope that by re-engineering another part of their treatment process, they’ll be able to turn virtually all of the Class B waste into Class A waste. Class A waste can be used to fertilize crops intended for human consumption or even spread on your front yard flower garden.

The Asheboro plant and its operators are just getting started.